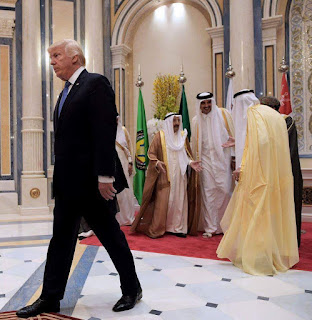 During the month of May, a tension broke up between a number of the Gulf member states following the statement of the young prince of Qatar, Sheikh Tamim Bin Hamad al-Thani, claiming Iran to have “a big power in the stabilisation of the region.” The statement outraged the gulf leading member state, Saudi Arabia and its main ally United Arab Emirates calling on Gulf and Arab countries to boycott Doha. The state of Qatar denied the allegations saying that the state TV had been hacked and false statements posted on it.  Regardless of whether the statement was accurately made or falsified, Qatar role and its foreign policy as a member of the “Arabian” Gulf Co-operation Council (GCC) remain fascinating to securities. Here are some of my reflection on Qatar’s distinctive policies and behaviour as a micro-state.
Qatar's “pragmatic” Wahhabism
No to Saudi Patronage
Security Dilemma
“Soft” Foreign Policy
Vigorous Diplomacy

Qatar: The Prodigal Son
Trump’s recent visit to Saudi seems to impact relations within the Gulf house. KSA and UAE bent on a political realignment of Gulf member states and Qatar will be pushed to the shelves unless it shows compliance with Saudi policies.